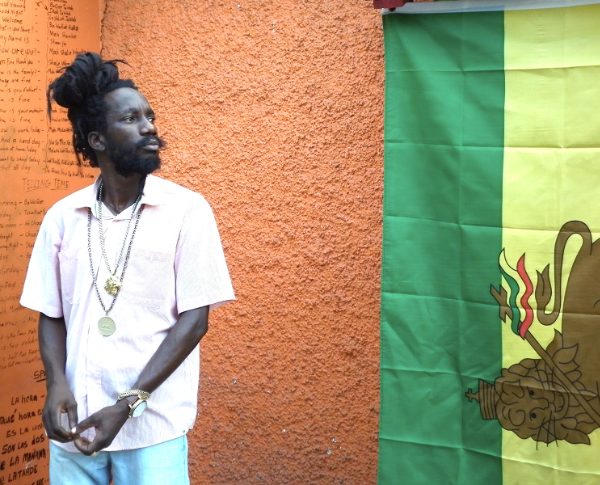 Miguel Orlando Collins, known by his stage name Sizzla Kalonji or Sizzla, is a Jamaican reggae recording artist. He is one of the most commercially and critically successful contemporary reggae artists and is noted for his high number of releases. As of 2018 he has released 56 solo albums. We are honored to have released one of those on Muti Music with arguably a couple of his most successful tunes included on it, namely I’m Living, Blessed and Champion Sound. We also obtained remixes for the tunes from some of the movers and shakers of bass music in the world including An-ten-nae, TASO, Gaudi, Dub Phizix, Om Unit, Ed Solo & Stickybuds, Dov1, Nico Luminous, Hypha, Skeptical, Janak Selekta, Hooves, Spoonbill and many more.

Sizzla was born in Kingston, Jamaica, to devout Rastafarian parents.[2] Like them, Sizzla subscribes to the Bobo Ashanti branch of the Rastafari movement.[3] He was raised in August Town, Kingston, Jamaica where he studied mechanical engineering at Dunoon High School.

Sizzla began to develop his own style whilst serving his musical apprenticeship with the Caveman Hi-Fi sound system.[4] He has used his music as a vehicle for his message, kickstarting his recording career in 1995 with a release through the Zagalou label,[5] he then teamed up with “Bobby Digital” Dixon for a series of singles.[6] Extensive touring with fellow Xterminator label mate roots and culture artist Luciano followed, earning Sizzla notoriety .[5]

Homer Harris, the same man who named and mentored Buju Banton got him his first break, introduced Sizzla to top Jamaican saxophonist Dean Fraser, the musical director for Philip “Fatis” Burrell‘s Xterminator Family. 1995 marked an important turning point for Sizzla when he began working with Fattis.[5] This union led to a run of successful singles and the release of Sizzla’s debut album, Burning Up.[5]

The two allied again a year later with the follow-up, Praise Ye Jah (JetStar).[5] Praise Ye Jah was quickly trumped by his release of the Dixon-produced Black Woman & Child that same year.[6] The title track was a smash hit and became something of a cultural reggae anthem. Sizzla scored several more hits during 1997, including “Like Mountain,” “Babylon Cowboy,” “Kings of the Earth,” and the Luciano duet “Build a Better World”.[5] This hot streak kicked off an enormously productive recording binge that lasted over the next several years, with much of his output still done for Burrell.[5]

Along with universal praise came Sizzla’s first nomination for Best International Reggae Artist of the Year at the 1998 MOBO Awards and a place in various magazines’ top 100 albums of the year.[6] Sizzla has since released several dozen albums, including 1998’s Kalonji and Royal Son of Ethiopia from 1999. 1999 also saw him receive his second MOBO nomination.[6] Sizzla remains a constant presence in the reggae charts worldwide. Currently, Sizzla has 21 albums that have made it onto the Billboard’s Top Reggae Albums music chart, the highest Words of Truth, reaching the peak position of No. 5.[7]

Sizzla Kalonji has released over 45 solo albums and over fifteen combination albums, crossing different genres of Reggae.[5] He has started his own record company, Kalonji Records; which in a joint venture with Damon Dash Music Group and Koch Records, released the album, The Overstanding, in November 2006.[5] This was his third album released through Kalonji Records; as well as Black History and Life.[5]

Sizzla, along with reggae recording artists such as Capleton, Norris Man, Turbulence, Buju Banton, and Anthony B, are credited with leading a movement toward a re-embracement of Rastafarian values in contemporary reggae music by recording material which is concerned primarily with spirituality and social consciousness, explores common themes, such as Babylon’s corrupting influence, the disenfranchisement of ghetto youth, oppression of the black nation and Sizzla’s abiding faith in Jah and resistance against perceived agents of oppression.

Sizzla’s 2008 effort, Ghetto Youth-ology, is produced by the Firehouse Crew, the same who produced Sizzla’s debut, Burning Up.[8]

In 2013 he released the album The Messiah. In January 2014 it was nominated for a Grammy Award, his first nomination. [9] In 2014 Sizzla was featured in the song and video for Stephen Marley’s single “Rock Stone.”

His sons Raheem Collins and Melech Collons have followed him into a career in music, working under the name Reemus k and Skorcha.[10]